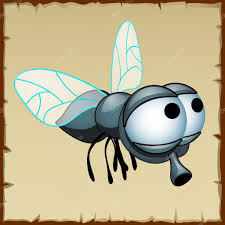 Eugene yawned. He dreaded another day of banging his head against the glass.

His friend Leslie, however, was eager to get started.

“Yesterday that precocious young fly Skip said he felt the glass in the upper pane softening a little. Let’s get cracking! Today’s the day, I can feel it.”

Eugene stretched his wings and nibbled on sun-dried bacteria. “I’ll be there in a minute.”

Most of the flies stuck between the storm window and the regular window were already banging away.

His world measured approximately 64 inches by 26 inches by 5 inches. The majority of flies were banging on the glass facing the interior of the house, and not on the storm window to the outside. That’s because the curtains in the little shack were usually closed, which made the interior window into a weak mirror reflecting the trees and fields across the road. And that’s where they wanted to go.

And all memory of night, when they had banged away on the storm window facing the dark fields and trees, had by then faded into legend.

“Eugene thinks he can sit there all day and reap the benefits of our hard work!” a fly named Bixby complained, when he saw Eugene slowly crawling his way towards them.

“Yeh, but guys, how many generations of flies have been trying to get out of this window?” Eugene said, looking down again at the piles of corpses on the sill.

“Oh, listen to Mr doom and gloom!” Bixby said. “Legend has it that a fly named Boris flew out this very window and into those yonder trees!” Bixby shifted a wing to point at a shimmering mirage of a tree. “So how’d he do it? Not by moaning, but by banging that’s how.” END_OF_DOCUMENT_TOKEN_TO_BE_REPLACED