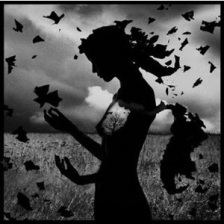 I’d like to build this brief consideration directly on the back of Direct and Indiret Meaning.

When words, ideas, beliefs all become transparently ersatz, the question of what is real becomes extraordinarily urgent.

Where is the still point in this bending and spinning hall of mirrors that is consciousness?

When nothing that I know about myself is real, when everything is only a story, whose narrative lines are always being bent by ferocious headwinds of fight and flight, by a desire for admiration, where do I find a foundation upon which to live a confident and humane life?

I think there are two ways to see through the simulacra of human thought and imagination. Both seem to be coherent, but one seems to penetrate more deeply:

One is to merely dismiss this capacity for invention as a psycho/political drama of self-preservation. Another is to recognize this capacity as the most powerful (black and white) magic that has ever been granted to a living thing. The second encourages a sparing use of the imagination. And the more sparingly imagination is used, the more profoundly powerful it becomes.

I’m not taking time just yet to lay out these two ways of responding to the discovery of the limits of thought. But I think I’ll eventually show how both Jimmie G., or “The Lost Mariner” in Oliver Sacks’ The Man Who Mistook His Wife for a Hat; and the narrator in Beckett’s The Unnameable reveal minds encountering this limit.

I want this particular essay to be brief; to merely lay the groundwork for examining The Unnameable and The Lost Mariner when i might feel up to the effort.

One thing I have to note in passing is that Oliver Sachs – and I love him very much – does not quite seem to recognize the difference between living in the present and living in a memory drastically shortened (by brain damage in the case for Jimmie G.). For Oliver there is only a healthy Self tied to the identification with memories, and a lost Self, cut off from those memories.

The narrator in The Unnameable is also stranded in a drastically shortened narrative space that requires the constant “telling of lies” to keep himself, supposedly, from drowning in Selflessness.

The Unnameable has memories, but he sees through the falsifying motivations of these memories. Somehow this allows the reader to obtain an “overview effect” — a meta-level view is opened up by The Unnameable on the question of identification.

The Unnameable simply doesn’t believe what Oliver Sachs believes – that a healthy Self is tied to the identification with memories. The Unnameable sees through this point of view as another tall tale.

Here The Unnameable flirts (by default, negatively, without saying this directly) with the recognition that confidence and well-being are not tied to “holding oneself together.” It flirts with the insight that a confidence in being emerges precisely when confidence in oneself disappears.

What I’m referring to is a kind of Self-Neutrality, a suspended state, as David Bohm might say.

And when meeting the limits of thought in a radically penetrating manner – in a way that does not stop in fear at the prospect of a loss of Self, and does not bog down in a swamp of self-recrimination  – memory loses its dominating hold. It still serves a function, but not a function of identity beyond this stage.

At this stage confidence directly correlates in a most unexpected manner with uncertainty. We stop trusting the images and begin to trust the vast, unnameable, unknowable movement of being. The compulsions of memory want us to pin this “being” down to some knowable definition.

5 thoughts on “The Meaning of Confidence: A Brief Appendix to Direct and Indirect Meaning”

This site uses Akismet to reduce spam. Learn how your comment data is processed.